One of my bad habits is racking numerous open tabs up in my browsers. It’s something I’ve tried to curb in The 2014 100, but it still creeps in if left unchecked.

After chatting with a friend who misses the short posts I used to put out with 100 Happy Days, she got me thinking on what I could put out that was short and sweet but could still be valuable to my readers.

So in that spirit, here’s 10 Links You Should Click, a (maybe weekly) look at the stuff I come across and think you should check out. It could be things I want to make or do, or maybe stuff I just discovered that made me pause.

May these links titillate and thrill you, excite and entice you — and give me a reason to do this again! 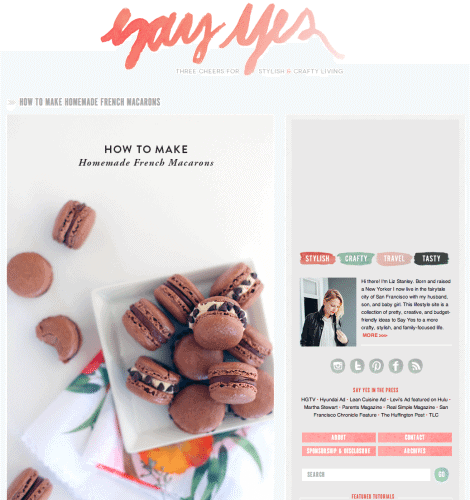 I’m one of those strange people lacking a sweet tooth — I prefer tarter tastes, particularly lemon. Last I was in Paris, I had amazing macarons chez Pierre Herme and Ladurée — I could buy them in  my ‘hood at Patisserie la Cigogne, but it’d definitely add up after a while.

So if I gave it the time and concentration, this would make for a perfect use of our Kitchen-Aid stand mixer!

The likelihood for me to actually make it is low, but at least I’ve got a good recipe, right?

Though not classically trained in graphic nor web design (I majored in business and social science under duress), it’s been a long-standing interest, with my first website designed as a high school project in 1998.

Yeas later, I’ve an iPad stuffed with ebooks on all aspects of the trade by SitePoint and Smashing Magazine, and a thirst for upgrading my site that’s not easily quenched.

These tools and courses are solid places to start your quest if you’re looking to design your own work — that last one’s a link from my friend Ria, who’s making inroads with the development community herself!

Though an amateur programmer at best, I’ve learned a lot about things at their most elementary level, like CRON jobs — the things you use to automate processes online. There’s a project I’ve tried doing manually in the past, and it just got too big to bother anymore.

Though I’m not good enough to code it yet, I head CRON jobs aren’t the most reliable tools, and looked for a better way to make it work. This looked like a likely candidate!

Pizza’s one of my greatest comfort foods — though I’d love to nosh of Pizzeria Libretto every waking moment I could find, it’s not the cheapest joint in town.

When Sarah gave me this list, I wanted to try something new — the shop we have around the corner’s decent, but it’s not great.

So we ordered from one of the five shops on this list — or so we thought.

Instead of Diamond Pizza, we ordered from Diamond Corner Pizza — perhaps it was the placebo effect of thinking it was on the list that made it taste better than it actually was? 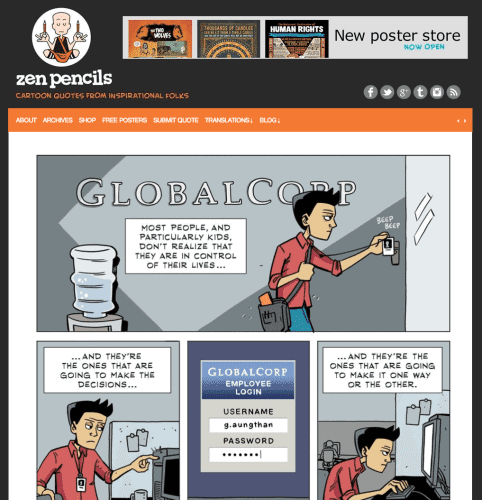 This has been a source of inspiration every time I read it. Much like his Bill Watterson piece before it, Gavin Aung Than shows us that there’s more to lie than security in a job we hate.

With a growing family, I feel the urge to provide for them growing in kind — but is it worth being miserable with the jobs I need to work to do it?

Gav’s Zen Pencils gives me hope, and I’d like to thank my buddy Jay for reminding me of it. 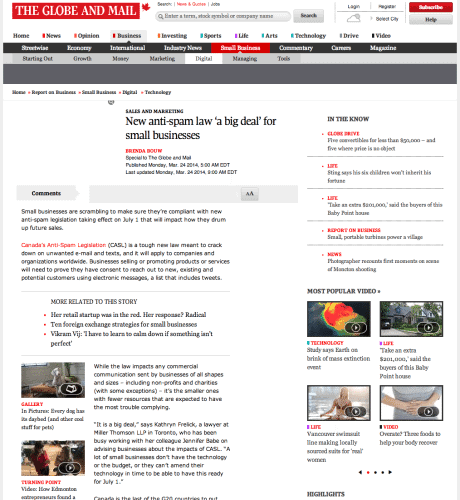 Christine alerted me of Canada’s new anti-spam legislation some time back, prompting me to do some research on what to expect come July 1st. After crying wolf a few times, I feel like I’ll be okay should I follow a few new rules, but if you don’t know, you better know — getting fined up to $50,000 a day ain’t funny!

If you remember my Father’s Day post with stats on Toronto fatherhood, you might be interested to know that Toronto dove even deeper, providing stats for each of their wards! There’s a follow-up project I have in mind that’d rely on this data, but for now, it’s just good to explore and get to know the city a little better!

That time we had some RIDICULOUSLY delicious sirloin from @RoastButcher!!! #foodgasm pic.twitter.com/GdBclGuugj

About a month ago, we opened barbecue season with friends who brought some delicious steak from Roast Butcher. The meat was amazing, but the marinade? That marinade sent it over the top!

So, for posterity, here’s the Epicurious recipe my friends used to put it together — the special touch? Hockley Valley Brewing Company’s Dark.

This is definitely something I’m interested in trying again!

And that’s it — 10 links on things I’m interested in! I hope at least one of them strikes your fancy, and hey — maybe I’ll have enough to do the same thing next week!

Until then, happy Internetting!

i am titillated, thrilled, excited, and enticed.