For those keeping track at home, I’m at about a 25% success rate with The 2013 100 so far (not so bad considering that I found 35% of the list as a waste of my time — really shows you how much someone can change in a year!) As we enter the Christmas season, it’s all about wrapping up those to-do lists, trying to end the year on a merry note to open the new year dashingly.

Let’s see whether I boost that success rate today! 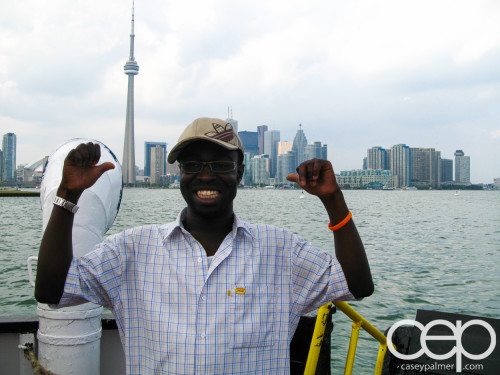 Living in Toronto and never having gone up the CN Tower is a lot like living in Paris and never having climbed the Eiffel. Or living in New York and never climbing the Empire State Building. Or the Statue of Liberty. Or the Rockefeller Center — jeez, New York, how many tall-ass buildings do you have?!

I’ve lived in Toronto area all my life, and somehow did it without visiting this city’s most notable landmark! No sooner than  I’d mentioned it, friends were sending suggestions my way on how we could tick this one from The 2013 100 list:

“You should climb it in the Enbridge CN Tower Climb for United Way in October and blog about it!”

But in the end, Sarah came up with the best idea:

Easily the most stratospheric restaurant in the city, 360 is attempting to masquerade as a fancy joint in a place that’s pretty dated.

I mostly enjoyed the views and the food, but the craziest part of the experience is trying to find your table again after going to the washroom! Sure, they mark the sections, but when your seat is constantly rotation around the pivot point where the washrooms are, it only helps so much.

If you want a nice place to see the city while you dine, 360’s a great place to go — it’s the only way to get value of out seeing the CN Tower as a tourist, because the open gallery beneath it is a hot mess, has longer line-ups and — well, it’s generally pretty chaotic.

I’ve done the CN Tower once — I probably don’t need to return for a very long time.

Well — unless someone wants to pay for my EdgeWalk experience, but we’ll save that for next year 😉

EdgeWalk: On to the next year!

So Casa Loma was recently sold and its future looks toward converting it into a restaurant, event space and museum. I don’t have any burning desire to visit — I was just on this “tourist in my city” kick that I thought needed dealing with, but I think I’ll wait on this and see how it turns out.

33: Create a list of cool things to do in Toronto

When Sarah and I visited NYC in 2011, I searched for the best travel guide to help me get the most out of the city, and was instantly inspired by Zoomdoggle’s Fun List NYC. I soaked in so much New York that after a week, I considered living there!

When I got back to the Great White North, I thought — “Why don’t we have a guide like this for Toronto?”

Whenever someone’s visiting Toronto, Torontonians refer them to the same ol’ stuff. Go check the CN Tower out! Catch a Jays game! Take a stroll through High Park!

But we know better.

In 2014, I want to take another look at building a list of things Torontonians love to do in their city, and then maybe we’ll have a Fun List, too!

(In case the original link isn’t working correctly, you can find the PDF here: http://www.nuok.it/doc/funlist.pdf.)

34: Run a cool 5K race, like Run for Your Lives or Tough Mudder

In an ideal world, I’d have a year’s worth of content scheduled so I could make more time to do stuff like run.

You don’t just wake up one morning and decide to run a 5K — people train for distance runs, conditioning their bodies so they don’t have a poor showing when the time comes to perform. Aside from sporadic games of dodgeball and Ultimate through the year and doing some heavy lifting at home, I’d say that running a 5K in my current condition would be the literal death of me.

Next year, let’s try some baby steps and include more physical activity in my routine. Once I’m used to that, then let’s look at conquering a distance run.


Anyone know any good sales coming up for running shoes?

35: Clean my music collection up, once and for all

So I did what any OCD audiophile would do — I backed the music to my 3 TB external hard drive and started culling.

With iTunes Smart Playlists and an acute sense for my musical tastes, I managed to bring the collection down by more than 90% to 1400 songs that I could listen to without mashing the skip button on my headphones to death!

36: Establish a far better filing system for my documents

There’s already a problem word here in the item itself — documents.

I have some mild hoarding tendencies — I came by them honestly, but I won’t tell you which side of the family they’re from!

When I had to convert my office to a nursery, we unearthed a number of papers I hadn’t looked at in ages: old newspaper clippings, magazines, notes — I was holding on to a number of items that played parts in my life, “just in case”.

Just in case I had an amazing infographic idea and needed some visual inspiration. Just in case there was a life-changing article in one of those magazines that I simply couldn’t do without. Just in case we had a global paper shortage and I needed to keep my family warm.

So, yes, I came up with a better system that’s more befitting of our digital age and trying to live in a paperless environment.

I recycled the heck out of it all.

There’s still a bit left over, I will admit but it’s nowhere  near as bad as it was. And as my Dad taught me back in the restaurant days, there’s only one surefire way to deal with a mess:

Clean as you go.

37: Use all the different themes, templates, tutorials and eBooks I amassed in 2012

Unfortunately, hoarding isn’t limited to physical items — my hard drive’s stuffed with textures, themes and other digital files I’ve amassed from different sales over the years, and it ain’t easy finding the time to put it all into production!

It’s all part of a master plan — to eventually get my design game tight and define my individuality once and for all.

But my site in’t my full-time job — a white-collar  family man has a couple other obvious priorities to deal with, so let’s table this for next year.

(P.S. If anyone ever needs a hookup, we’ll look at some licensing agreements and see what I can do!)

Not only do I keep enough on my plate to keep 2 or 3 people busy, years of surviving on 4-6 hours of sleep trained me perfectly for fatherhood, which is kinda nice.

So yeah, sleep when I’m dead!

…or at least when it’s doctor-mandated.

There’s one word to describe the act of trying to get every last thing done at an office job to the point where you’ll never need to look at your task list ever again:

Something you either learn quickly or never learn at all is that there’s no end to work. Someone will always come up with something for you to do — some unforeseen wrinkle in the operations adding to the smorgasbord of accountabilities you already have on your plate; some jerk who’d held on to something for far too long because of laziness and now with the deadline approaching has made it the most urgent thing ever — work is endless.

As a not-so-young employee in an older workplace, I can see the workplace from both sides. I see the older employees thinking that the youngins don’t know what it means to put in an honest day’s work and just get the job done. I see the new, young staff who are hungry to prove their worth, frustrated by tasks reeking of inefficiency and ridicule.

In my case, I’m at my 9th role at my organization in the last 6 1/2 years, and I’ve become a “fixer” in that time — I enter broken projects and get them back on track, striving to leave them in far better shape than I found them. But I soon discovered that even that wasn’t enough, with people from my old jobs ringing me up to get advice on how to do things like I did them.

So good luck getting rid of all your work, because it’ll never happen. What might happen is a nervous breakdown from trying to do it — so hey. How about we just be realistic?

Blog writing is one thing, but we’re a commodity-based society, dealing in goods and services to improve our perceived quality of life. It’s one thing to write stories on my site that make people laugh and think, but that’s 5 minutes of value. What if, instead, I could create something that gave 5 minutes of value? Or 5 days? Or even 5 years?

Up until now, I’ve struggled finding a niche. I was a Toronto lifestyle blogger dabbling in social media strategy, tech, food and travel. As soon as DoomzToo entered the picture, though, it was time to balance all that with the challenge of fatherhood.

And there it is. The niche. How to do daddyhood right and still keep a blog on the side!

I chat a lot about still finding time to be yourself despite your new responsibilities — perhaps it’s time to put my money where my mouth is and package it in steps for other Dads to read.

You’re almost halfway through the journey that is my 2013! Please feel free to try something from the complimentary snack bar while you wait for the next destination! Our next stops include stepping my game up as a photographer, why I suck as a gamer, and feeding the urge to dodge and burn! [/designer joke]

Until next we meet,