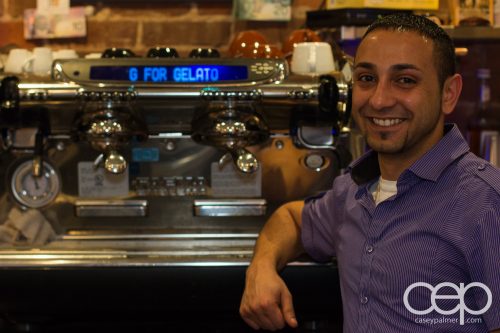 Shant Behesnilan is a man who’s passionate about customer service. He’s done what many only dream of—making the jump from working a safe job to working the right job.

After travelling the path of many a Canadian—go to school, get a job, pay your dues—Shant soon discovered that life behind a desk wasn’t for him and went on a quest for something different.

Under Shant’s new management and ownership as of fall 2012, G for Gelato has a ton going for it—a scenic view of St. James Park across the street, authentic Italian food and customer service that brings it all together.

15 replies on “G for Gelato and Espresso Bar”

As a woman who lives dangerously (ie within walking distance to both Hollywood Gelato and The Mad Italian on Bayview), I am stoked to check this place out. Also: the pizza looks fantastic!!!

It was all RIDICULOUSLY delicious — the pizza chef actually worked (works? I don’t know whether we were told he still works there or if he’s a vet from there) at Pizzeria Libretto, so the man knows what he’s doing with dough! Sarah described many of the flavours as “refreshing”, so that’s always a good thing 😉

Perhaps we’ll all go check it out sometime — has line-ups out the door on a regular summer or weekend day, so we’ll have to time it!

YES! This is close to my work! Do they have Nutella gelato?!

The closest I see offhand from the photos was the Ferrero Rocher gelato, but if you want to get rid of all the cruncy bits, I’m sure they have something close. I looked at the labels in the photo and didn’t see “Nutella” SPECIFICALLY, but many flavours that looked pretty close to that delicious hazelnutty spread 😉

I live around the corner and haven’t been. Definitely will check this out now.

Will definitely be trying this place out now.
I hate to admit, I live around the corner and haven’t been before.

Give it a shot, man 🙂 I had a really good time when I was there and was impressed by how flavourful everything was. It attracts a lot of tourists due to its location, but they recognized a lot of them as they came in and make them feel at home, so it looks like they get a lot of regulars, which is ALWAYS a good sign 🙂

I love the images and YUM!

If the photos make you hungry, then I have done my job correctly 🙂

[…] more (and better) pictures of the the gelato etc., check out Casey’s blog post.  We bumped into Casey and his wife Sarah – they dined there just before we […]

casey, this is reporter style! you got way more of the story behind shant’s path towards g for gelato. it’s fun to see your experience, and then contrast that to mine. similarities? we both had some amazing food. i’d be back for the gelato, 100%.

and great pix! i added a link to this blog post on my blog bc people have to know!!!

Thanks for the love, Judy 🙂 Your link showed up as a pingback on my post, and I was very happy to see it 🙂

But yes. It was DELICIOUS! Definitely somewhere I need to visit again!

I might’ve missed it but what’s the addy? I’ll keep it handy for when I’m in town.

It’s at 75 Jarvis St. at Jarvis/Adelaide. I’ve now updated the post with the format I plan to use to intro food blogs — hope it helps!