Okay—I have work tomorrow at 9 in the morning, so I shouldn’t stay up too late getting this out of the way. Let’s see…

Well firstly, this week’s moral is to never ever EVER put a new video game in front of Casey. My brother brought home a copy of Paper Mario: The Thousand Year Door, and let me tell you, since Sunday I’ve been tearing through it. However, it’s TOTALLY de-railing all of my plans and sketches that I have lying around—I get in front of the TV and feel compleled to find out where the story’s going. Horrible, I says.

So as I sit here eating Salt & Vinegar Lay’s chips (PRODUCT PLACEMENT!), I bring you four sketches. The first was one I did of my friend Binh while enjoying a Lemon Green Bubble Tea with Tapioca at Bubble Republic, one of my semi-regular hangouts. I think it turned out decently 😊 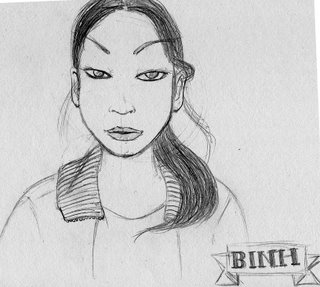 And in an uncharacteristic move from Doomz—I bring you fanart! This is all drawn from that crazy ninja manga, Naruto.

***DISCLAIMER***: If you’re not following the manga, there may be spoilers afoot below! Don’t say I didn’t warn y’all!

First off, we have the humble beginnings of what will be a mural dedicated to the oh-so-polite villain Orochimaru. He’s too bad-ass to not do this for, so I think it’ll be good once I get it all together. 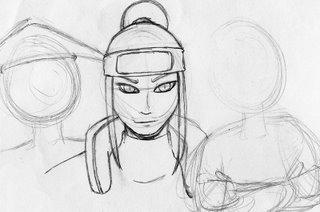 And of course, for those of us not living under a rock when it comes to Naruto, you’ll know that Chapter 306 marked a fairly momentous occassion—it’s the first time we’ve seen Sasuke in light (i.e. his full outfit and appearance) since he left his home village of Konoha several years ago (about a year’s worth of manga). Due to this, fanart needed to be done. Or at least started. To be honest, I’m not too happy with either of them at this stage in the game—some tweaking will need to be done to both before I consider them passable. 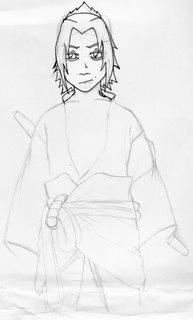 Anyway, yeah—back to hiding and playing Paper Mario for a week or so. See you guys sooner or later 😊

i like the orochimaru pic its rockin. what ends up happening at the end of naruto, i stoped watching it a while ago.