Okay, alright, I realize that it’s been FOREVER since I last posted (July 5, 2006, if you weren’t keeping track), and I don’t have too much of an explanation for it, outside of:

1) a distinct lack of colour in my work which is still present to this day
2) a lack of improvement in my work (in my opinion, anyway)
3) still being as angry an individual as I’ve ever been

HOWEVER. This doesn’t mean I haven’t drawn. On the CONTRARY!

There’s plenty art to be shown—I’m just not especially awestruck by any of it. Here’s some to start with, anyway.

So I’m in the middle of trying to come up with an innovative new design for my website (so far to no real avail), and I was working on a new look for my characters for the front page. I was thinking of having the guys appear on the left side with a simple colour banner extending behind them across the page (you can see what I mean on the example with Doomz). I wanted to show a newer, fresher style than what’s on the website currently, hence why their expressions have a bit more of an edge to them. 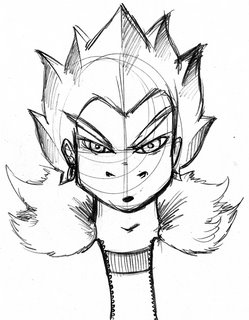 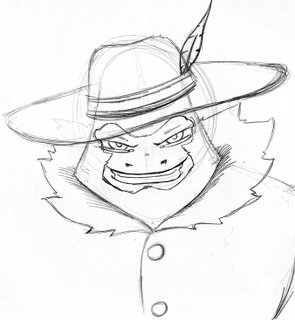 But yeah, I have some other things I’ll post as the days go by. Don’t want to leave all of my cards on the table all at once and come up dry for months to come. But yes, I won’t say I’m back, but let’s say I don’t intend to vanish anytime soon.

Good to see you up and at it again. I would suggest to help with feeling frustrated with your art, try some stuff that’s very very diffrent. Draw more things other then your characters, or draw them drasticly diffrent. Or just do lots of from life things, or try a new medium, like using a brush and ink, or more photoshop colouring, or things like that. And last but not least, look at as much ‘good’ art as you can and it will give you ideas and inspire. I’m looking forward to seeing the new ways these characters end up looking when all is done and settled! wooooop woop wooop, bishops in the house!

Bishop? Who the hell is Bishop, man?

haha, it’s all about having fun. Get dirty, make mistakes.
kill them all.