Well guys, looks like somehow we managed to get to 100 posts up in this blog! Everyone should give themselves a pat on the back 😊

Anyway, it’s another Monday, time for another post. Hells yes!

Right, so what do we have from the Vault of Randomness today?

Alright, exhibit #1 is a shot of Franz von Chimpenheiser in his new duds. It’s a scene that won’t be coming up in Fish & Chimps for a while, but I brainstorm a lot. Most of the sketches I do pertaining to the future of my comic I usually keep, because they’re either not refined, or they’re to telling about the future storylines in my comic. I’ll keep it all a surprise for now 😊 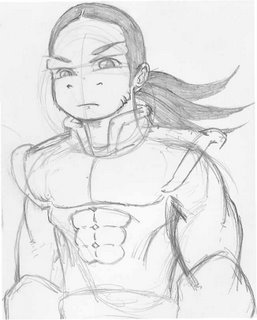 And for shot #2, it’s a team shot that I started on after I drew that chopstick piece yesterday. Seeing how well that first one turned out, I wanted to try a second piece to see if the creative juices were still flowing. My main problem is turning out to be how I want to depict Doomz and Nick who’re on either side of Kyle in the centre, but we’ll see if I can figure it out sometime soon. 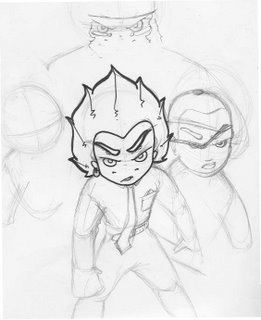 And finally for today, we have a shot of a future character named Ruddiger. He shares a past with some of my main characters, and will become a very interesting character in a storyline that I don’t realistically see myself getting to until 2009 or so. No, honestly. F&C is going to take AGES to draw out and complete. 😑. 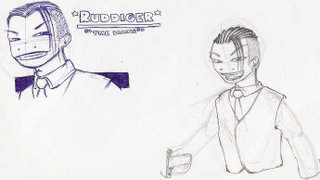 Yeah, so just to show—I do draw, I just don’t show all of my cards on the first round 😉

Anyway, keep drawing, everyone, and I’ll be seeing y’all soon!