Well THAT saved me a lot of time. DAMN. Why didn’t anyone tell me about this before?!

Mm. That’s a whole lotta posts, people! So as I sit here sippin’ on some Sprite, chewin’ on some Pocky, and slicin’ out pages from some old VIBE magazines so I can later use them as reference for future pieces, let me take a break for a sec to get some more random sketches on the hard drive posted up for your potential enjoyment!

One thing I’ve always enjoyed doing for Fish N Chimps is sketching out potential storyboards for future storylines. I’ll show you a bit about how I go about it below.

(1) It doesn’t show in the strips I have up right now (which, granted, are years old by now), but as time has gone on, I’ve developed a more cinematic view for Fish N Chimps. I pretty much have the loose groundwork for the full story in my head and sketched out in various notes in my room—it just needs to be translated into comic form for everyone to enjoy. In this one below, it’s the intro scene for a couple of characters—Chisel & Trim. I won’t give too much away about them, though. Prior to this scene, I’ve used the common comic foreshadowing effect of having them drawn in black beforehand, and then not fully revealing them until this scene. They would both show up in the third panel behind Nick—it’s supposed to be a market square full of people to better camouflage them. 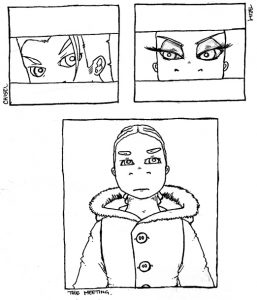 (2) I also do a lot of practice with dialogue. Half my life is spent telling jokes, anyway, so despite the fact that I’m now trying to tell a story with my work, I definitely want to keep interlacing a lot of humour into it. If I didn’t, it wouldn’t be reflective of my vision. My goal for Fish N Chimps is for it to be a culmination of all my different creative abilities, which I’ll keep trying to develop over time. 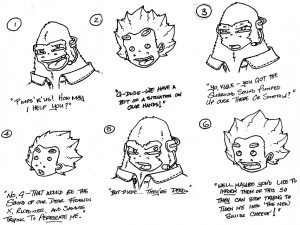 (3) But more often than not, it’ll just be a single dialogue-less scene I wish to capture. Something I don’t want to forget that’s integral to my storyline. Seeing them separately often doesn’t make much sense, but they’re lynch pins in the path of my story when I place them in the grand scheme of things. 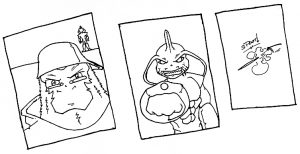 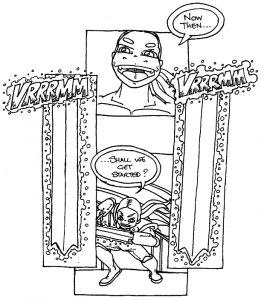 Anyway, yes—I have things to do, not so much places to be, but you never know with me.
Hope everyone’s having a day full of AWESOME.