From talking to a lot of my friends, I find that many people waste their free time. There’s so much out there to distract us—television, “news” (think about how much of your newspaper is taken up by ads and information that has no effect on your life whatsoever), entertainment—but these are all designed to dull the senses; to let us forget that we’re not using most of our time to do what we actually want to be doing.

Usually, we simply accept our lots in life—we accept the jobs that we have and rarely consider a different life. We usually keep the same social circles, habits and routines, rarely breaking away from them to flirt with reinventing ourselves.

Some of the things I’ve always liked doing are drawing, sorting information and coming up with cool ways to communicate information. So when Niya told me about the Toronto Service Design Jam, I thought it would be a cool weekend to firm up my design chops and maybe learn how to take my infographics game up a few notches.

But what I learned was something else altogether.

So the entire idea behind the weekend was to take the tools that they’d shown us and use them to create ideas on a specific theme that would help to solve problems in the environment around us.

We worked hard, we had lots of ideas—but when it came to communicating our idea, there were other groups that kicked our team’s ass.

Seeing the other groups present was quite the experience—I could complain about the nature of our groups and winding up working with far less resources than the other groups; the fact that I don’t work too well in groups where you have to actually rely on one another to produce a completed product; or perhaps the fact that whenever we got advice and critiques from our mentors that it threw me completely for a loop, immobilizing my thought process and forcing me to re-think about everything I was doing… really, it all comes down to one simple truth:

I didn’t know what the hell I was doing.

Coming from someone who’s used to being good at what he does, this was a very humbling yet frustrating experience. I wanted to be as good as the people I saw with polished presentations. I wanted to have an idea that would change the world. But all I felt from the judges is that we hadn’t gone far enough.

Why didn’t we go farther? Why were our ideas all over the place? I don’t really get what you’re going for….

It left me feeling a bit dejected after, but it also reminded me that we’re not always meant to swim upstream and fight against our strengths.

I learned a lot about presentations outside of the formal and conservative style that I’ve grown used to—how to really get into the details of mocking services up—how to really draw someone in to your idea if you were pitching something like a startup or seeking funding for something.

You can get an idea of what we wound up creating here: 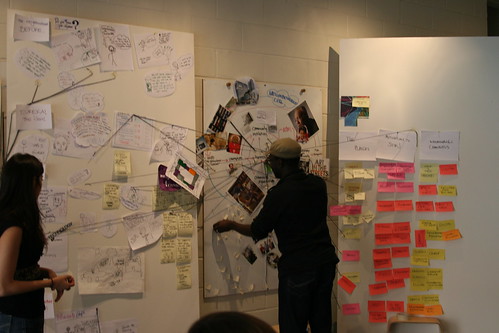 …or at our Global Service Jam page for Neighbourhood Social.

but I think next time, I’m going to take another look at firming up the skills I already have.