Above all else, #BramptonTweetup taught me never to say never, ’cause you never know when you’ll be eating those words.

Maybe Brampton gets worse a reputation than it deserves. In addition to the fact that there are all too many Torontonians who couldn’t point to Brampton on a map, people often say it’s too far, too hard to get to it, or too dangerous. And were you speaking to a younger Casey Palmer, I might’ve agreed with you.

The Far Side of the GTA 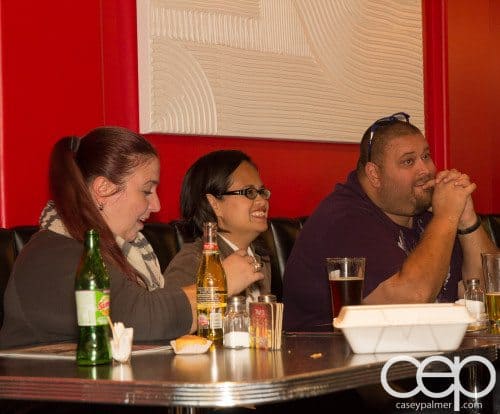 Brampton’s a long way from home, but sometimes you’ve gotta venture into unfamiliar territory to try something new.

In early September, my friend Lat reached out to invite me to a tweetup in her hometown on Brampton, ON. For those not in the know, I’ve a long and sordid history with that little place.

Born and raised in Mississauga, ON, Brampton was always the city just north of us that we’d never visit. I mean—being Mississaugan had its societal pressures—too good for Brampton to the north; not rich enough for Oakville to the west; and nowhere near cool enough to hang with the kids of downtown Toronto to the east. But we always knew Brampton was there, it just wasn’t somewhere we’d go after dark.

Funny what a couple of decades can do to change growing cities and negative perspectives, right?

After an unexpected (and unwanted) adventure on the east side of Toronto, Christine and I made the trek to the northwest to join Lat Leger and friends for the first-ever #BramptonTweetup at the Sul Irmaos Smoke House in the Downtown Brampton neighbourhood.

Who is Lat Leger?

I met Lat last year at either SaugaTweetup or AfterWorkDrinksTO, and since then she’s become a solid friend. Living in Brampton, ON with her husband Garrett and their 3 kids, she’s more than just an award-winning mommy blogger: she’s a social media enthusiast and strategist; self-proclaimed foodie and really likes singing in the car with her windows rolled down. When you connect with her, you expect nothing but candour and authenticity, so it was no surprise to me when I walked into #BramptonTweetup to see a number of familiar and influential faces from the west side of the Greater Toronto Area (GTA), as Lat’s a mutual friend to many of us.

After all, I’m not going back to the ‘burbs for just anybody.

Welcome to Sul Irmaos (English translation = Southern Brothers) Smoke House website. We’re glad you paid us a visit. We are known as the sandwich specialist and if you try one of our delicious sandwiches, you’ll discover that this name fits our restaurant like a glove. We will satisfy your appetite with an assortment of choices from our menu including Po’ Boy, traditional, Portuguese Churrasco and pulled pork sandwiches. Eat in or take-out at your convenience and we also offer first class catering services for special/corporate events and more. Give us a call or visit our restaurant today! We look forward to making your day!

If you’re in Brampton and looking for a good bite to eat, Sur Irmaos has some decent offerings. Dressed up as more of a lunchtime venue, it makes “slow food served fast”, which speaks to the daily effort that Jason and Jonathan Pereira put into assembling a menu that whets an appetite for smoked meats without investing the hours to do it yourself.

The Pereira brothers were nice enough to open up on a Monday evening for us (they normally close on Mondays for a well-deserved day off).

Many of their meats are seasoned, smoked for at least 8 hours and pulled, meant to infuse as much flavour as possible into their offerings. As a testament to their methods, after being rejected from joining Brampton’s annual Rotary Rib Fest, they decided to serve their own ribs, marinating their meat for 2 days and smoking it for 14 hours, with customers waiting up to 2 hours for a fresh batch when they ran out.

So the expectations were high going in to Sul Irmaos! Here’re some highlights from the experience!

Things That Were Great:

The Skinny on Sul Irmaos

We all enjoyed ourselves thoroughly, but what was clear, however, was that this was Sul Irmaos’ first foray in the world of tweetups. Things to note:

I don’t know whether Sul Irmaos offers enough to get Torontonians jumping behind the wheel for the 40-minute trek for a Po’ Boy, however, for Brampton’s 500,000 and Mississauga’s 750,000—if you want something filling, delicious and a mere stone’s throw away from your backyard, the Southern Brothers have you covered.

In the end, it looks like Brampton’s come up a bit over the years—perhaps enough to have a recurring #BramptonTweetup to rival the very popular #SaugaTweetup from its southern neighbours (ironically run in part by Rob Sarjoo, another Brampton resident!)? But to get to that point, Brampton’s going to need the support of its people—it can’t survive on the efforts of a few people alone.

And of course, thanks to Lat for a solid event and getting me to return to the ‘burbs. Not an easy feat by any measure, but it’s good to remember that you can only live in a box for so long before you start to lose sight of the bigger picture.

It’s a massive world out there—go explore it!

Adeus and get your nom on,

Great post, Case. I appreciate your well-balanced critique and, as always, your sense of humour. 😀

I don’t mince words on my blog posts (I really need somewhere to serve minced meat so I can make that an awesome pun!), and not every restaurant will blow your mind. I think what many bloggers need to realize/articulate is that it’s really, really HARD to be a standout restaurant. It takes effort, consistency, customer service, and a whole lot of luck to make it happen 🙂 I didn’t want to paint an inaccurate picture.

With that said, I did enjoy my experience at Sul Irmaos. If I’m in that part of town again, I could definitely see myself dropping by for another Po’ Boy 🙂

Nice post Casey, I’m sorry I missed out. I agree with what you said, restaurants need to realize that tweetups are basically free advertising so putting a little extra effort to make their guests happy can go a long way. Also thanks for the shout out, I really appreciate it!

Thanks, D — I got some insight into this particular tweetup afterward, and it seems that the things I had misgivings about may have been due to miscommunication and logistical errors, so hey. Maybe they had the right idea, but the execution was off due to factors outside of their control.

Keep writing, sir, so our paths in blogging can cross more often 🙂

It’s great that you were honest about your feelings and expectations of Brampton, but to be fair…it should be noted that Brampton gets a bad rap a lot of the time because the City of Toronto quietly dumped a lot of their underprivileged from gentrified places like Regent Park into our quiet suburban family-oriented neighbourhoods. Brampton is a great place to live and raise a family, but it’s time residents start standing up and explaining why it is so often in the news instead of allowing the Toronto media to constantly tie the city to crimes not committed by Brampton-raised residents. Next time you read a free newspaper…take note of how often they mention Toronto man in Brampton courthouse as if someone in Brampton did something wrong. If things happen in Mississauga, they only mention the street or intersection where the problem occurred as if it is a part of Toronto. I’m glad you visited Brampton, just wished you hadn’t started off your blog with such a negative review of the city, but sadly it is an accurate expression of how people outside of Brampton view the city. The next time you’re visiting, try driving through Castlemore or along Mississauga Road north of Queen St., you’ll see there are several affluent and well-kept areas of Brampton, but like most North American cities, the poor stay downtown (where Sul Irmaos is located) and the wealthy gravitate to the city’s outskirts. BTW I was born and raised in Toronto so contrary to what it may seem, I’m not totally biased =)

Thanks for reaching out 🙂 I truly appreciate that people are passionate enough about where they live to stand up and have a voice when they feel it’s being unfairly victimized.

You’re right — as a Mississaugan, I didn’t venture into Brampton often. A few times, sure — at Shopper’s World and a few times at Professor’s Lake, but my brother’s definitely more familiar with it.

With that said, I’d totally visit again. Over the years I’ve amassed quite a number of friends living up in Brampton, and they definitely make more trips into Toronto than I do out there.

But I don’t want to oversimplify this to a Bramptonian vs. non-Bramptonian or rich vs. poor debate — I’d love for some Bramptonians to start blogging about Brampton rather than just coming downtown and writing about Toronto like everybody else. There’s gotta be more people like you taking pride in where they live in order to make a difference 🙂

I hope we find them!