Yeah, you read that right. Why do I say this? Well—today’s sketches feature none other than the namesake for my most oft-used screenname: doomsdayblaze. I know where he fits in to the stories I write, but I haven’t had the chance to officially pencil him in as of yet, so it’s given me many an opportunity to tweak his design until I’m happy with it. This is what I have for a bust shot at the moment—I inked his eyebrows, but nothing else as of yet: 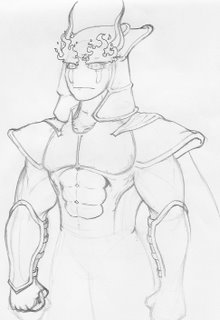 But I didn’t finish it, because originally I didn’t know what his armour would look like from the waist down. Eventually, I came up with this design—a bit inspired by Gladiator: 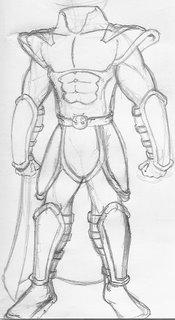 But what would a dude encased in a sick suit of armour be if he didn’t have an equally sick sword? Hence, his as-yet-unnamed sword of flames (here you see it materializing into its solid form): 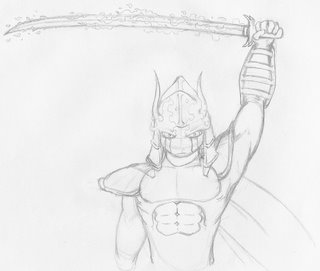 And finally, an update on the sketch I had of eight characters all in a cut-off headshot look—I like how it turned out: 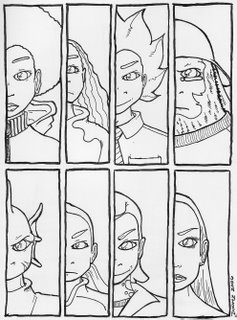 That’s all for now, folks! I have tons of crap to take care of! Have a good one!

I like how his fire eyes blend into the helmet with the flow of the horns.

Thanks Big W! I like how the overall design works – I’ll be using it a lot in the future, methinks.