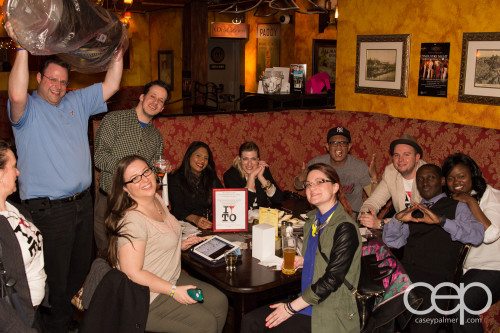 As an event becomes more popular, you can’t keep it free forever. From its humble beginnings in February 2012 where every tweetup starts — a group of people from Twitter meeting up to go out and have a good time — After Work Drinks Toronto keeps raising the (wait for it) bar for events of its kind, building greater partnerships to make sure that anyone going can have an amazing time.

There’s only one way to start this post — I’ve never seen a tweetup get so full so quickly. By the time the event was an hour in, there were easily already 40-50 people in the bar area, ready to slake their thirsts with Mount Gay Silver Mojito cocktails (ridiculously addictive), Melville’s Craft Lager and Innis & Gunn beers and a decent selection of red and white wines!

Much like before, I volunteered my time and camera to Amanda and Graham because I believe in what they’re doing with After Work Drinks Toronto (or AWDTO for short). [Disclaimer: In return, they were kind enough to give me a free ticket, but that’s not why I offered my services in the first place.] Nothing worthwhile happens overnight, and through their hard work and diligence, AWDTO is really coming into its own. Each instalment continues to set the bar higher, and I hope we continue to see many more as we finally head into the summer!

Even the wristbands set the tone!

Shashena and her team won with a ROYAL FLUSH. I didn’t stand a chance!

I really wish I won this, to be honest!

Looks strange, but it WAS delicious! Raspberry infused rather than flavoured!

The night went well — it was a mish-mash of food; drink, comments from our wonderful organizers (Amanda and Graham, as mentioned above) and sponsors (Mahit Lehang from First Choice Bartenders representing Melville’s Craft Lager and Innis & Gunn; representatives from Mount Gay Rum; and of course, Robin James Wynne, mixologist at Fynn’s Temple Bar); prize giveaways (none of which I won, don’t worry); caricatures (by Valerie White); music (by Matt Morgan and Craig Johnston of the Emerson Street Rhythm Band — at times accompanied by Joey deVilla); and just a lot of being social.

There was all sorts of activity going on, from discussion to dancing — if you looked out the corner of your eye, you could even see Christine helping run her weekly #RBchat Twitter chat at one of the tables! When you got in, you got an envelope containing tickets for beer sampling (of the Melville’s Fruit Beer — Innis & Gunn beer was on special for $5 a pint, though!), a Mount Gay Silver Mojito and  wine; a raffle ticket; and a playing card to play in the Best Poker Hand Draw, where you’d team up with four other people to come up with the best poker hand for a prize (a clever icebreaker)! They also drew for the person who was best-dressed as voted by the crowd, with the winner going to the County in the City festival with a friend!

While not conducive to heavy foot traffic, the Fynn’s of Temple Bar definitely has all the makings of an excellent pub…

If I wasn’t trying to take photos and mingle, I would’ve stolen plates of bacon-wrapped scallops, pulled pork taquitos and duck confit on tangy pineapple flatbread and sat in a corner all night stuffing my face. The apps were glorious, and my stomach wasn’t taking “no” for an answer! The full list of food was as follows:

I only had time to try a Melville’s raspberry Craft Lager and a Mount Gay Silver Mojito (which, again, was utterly delicious and ridiculously addictive), but there was a ton being offered up that night:

The night’s entertainment were Matt Morgan and Craig Johnston of the Emerson Street Rhythm Band who were both talented and entertaining, doing a mix of crowd-pleasers (see Neil Diamonds “Sweet Caroline”, for example) and always making sure to interact with the crowd and keep the energy levels riding high! You can see some more details on the experience on Joey deVilla’s blog, who would accompany them for several songs later into the night!

Robin and his Fynn’s staff were amazing — all smiles and service as they made sure that gusts were well-fed and having a great time (I will not confirm whether the alcohol samples paid any contribution to the great time being had)!

I just missed the window to get one done, but Valerie White was super-talented, whipping up amazing profile drawings of various attendees in mere minutes for a pay-what-you-can donation to Dress for Success! Here’s some of the awesome that she whipped up:

Thanks to everyone who came to #afterworkdrinksTO, we managed to raise a total of $383.45 for @DfSToronto. pic.twitter.com/KedDUjt7FE

In the end the event raised $383.45 for Dress for Success, and though I don’t know the specific turnout, from the photos and who I know was there, I’d guess a good 50 or so people in attendance, experiencing what AWDTO had to offer.

But that’s not what you missed.

What you really missed at After Work Drinks Toronto this time around was an opportunity to expand your social circles beyond what they are right now. The chance to meet people actually interested in exploring new things with you and not just out to give you excuses for why they can’t come (I heard of at least 2 groups of new friends going out for a bite after the event!) Events like AWDTO help remind us that we’re in control of our lives — in control of who we choose to hang around and what we choose to do with our time.

After Work Drinks Toronto reeks of possibility — so hopefully you make it out to the 9th instalment!

You can see more about the event at any of the links below.

The Epilogger run-down of After Works Drinks Toronto 8

My full gallery of 113 photos from the event on Google+

7 replies on “WHAT YOU MISSED: #AfterWorkDrinksTO 8 — The Dress for Success Edition”

Hey Case,
Awesome post, awesome pictures, and awesome sentiment. Thank you for taking me as your guest. I had a wonderful time and enjoyed “working” from After Work Drinks TO.
The people who attend are awesome, the organizers are amazing people.
I see bigger and better for this Tweet Up in the future.

Thanks for coming along, Christine — it’s good to know that my +1 spot wasn’t wasted 😉

All the massive events we know have to start somewhere, and I don’t quite know where AWDTO is headed next, but I don’t see many limits for it!

One of the things I was actually concerned about was the amount & selection of food but I guess I was so busy I didn’t see most of these things even go out. I’m glad it was all good though 🙂

As for numbers at the door, the final tally was 66 I believe.

Thanks for the shutouts to all the people who helped make this event so great. With the bar set it’s gonna be a good challenge to make the next one even better 🙂

Ha, thanks Graham 😉 As long as I’m around this summer, you guys know you have an extra set of arms and legs you can rely on to help make the magic happen. I ALSO didn’t get to try all of the food, but what I DID try was delicious, and I heard everyone thoroughly enjoying the rest.

I try to make sure everyone gets credit where it’s due — none of us grow without being there to support each other, so I hope I did them all justice 🙂

Love how you bring the energy from the event to your post. Awesome.

*smirk* Thanks! That’s actually one of the greatest compliments ever, because that’s PRECISELY what I try to do every time I write a blog post — translate the experience into words and pictures so my readers can feel what I felt!

Thanks for coming by, amiga 😀

You’re welcome. I enjoyed it!